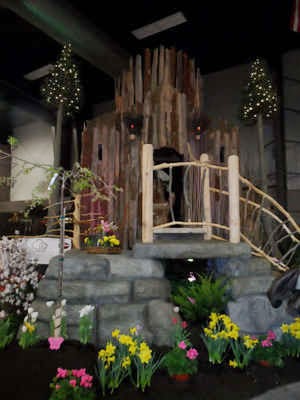 Plantasia, known as “Western New York’s premier garden and landscape show,” brought some indoor sunshine to the cold Buffalo-Niagara region Thursday through Sunday, March 20 through 23 at the Hamburg Fairgrounds. The annual collection of what’s hot and happening for the gardens and backyards of the area showed off some of the newest trends and what continues to be hot in the garden, with this year’s theme of “Party in the Garden” shown off to full effect. These were six of the top trends viewed at Plantasia this year.

Whimsy – Whether it was small items like garden stakes in the form of birds, flowers or Easter eggs, or life-sized iron sculptures of giraffes or horses, whimsy was a huge feature at Plantasia. Other examples of whimsy included a huge 23-foot tree house from Buffalo Tree House that was constructed from reclaimed hemlock and included a suspension bridge and throne fit for a backyard king; the display won three awards at the show.

Water features – Water continues to be a trend in the backyard, and was used in combination with whimsy at the tree house site. Another combination of the two: a backyard party display featuring a champagne bottle waterfall into a pyramid of glasses.

Fairy gardens and succulents – Miniaturized fairy gardens at the show often featured succulents, as the combination can be used indoors and outdoors. Fairy garden supplies can be found at many nurseries and garden centers, as well as craft and hobby stores like Hobby Lobby. While the plants and accessories are often petite, gardens themselves can be any size.

Recycling in the garden – One display featured wooden pallets turned into patio furniture, including chairs and tables; another featured a piece of drift wood used as a planter. This is another continuing trend, as the 2013 show featured objects like metal can lids and wine bottle corks as plant markers and pallets as gardens.

Polywood – Polywood, a plastic-like material often made from recycled milk cartons, has been featured for a few years as well, and continues to be an up-and-coming furniture product at the show. The benefits of polywood include its resistance to mold and rot, the fact that it is made in numerous colors (and requires no painting) and the fact that it can be left outside year-round – a big plus for the Western New York winters and for people without a lot of storage space.