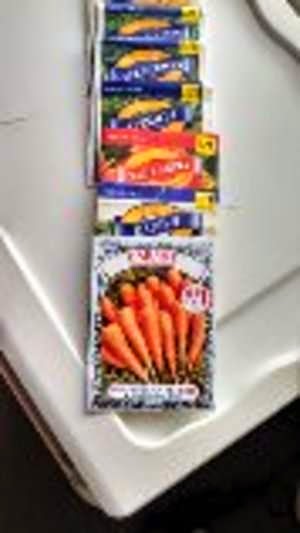 As a frugal gardener, I plant the majority of my flowers and veggies from seed. Extra work and extra time goes into this process, but I find it to be worthwhile. While many gardeners who grow from seed choose the high priced, open pollinated seeds from Burpee or Martha Stewart, I often grow the less expensive brand from American Seed.
After years of growing from all kinds of seeds, I find there is not much difference in the final product. As long as the seeds germinate, they are viable and the success of growth will be determined largely by outside factors such as sunlight, the correct amount of water and nutrition. I’ve compared the final results on several flowers and vegetables and have not seen a notable difference. American Seeds are organic and open-pollinated, no chemicals or GMO’s to worry about.

American Seed, though used as the name on the packets, is not the manufacturer of these seeds. This information is displayed on the American Seed website, here. American seeds are distributed by Plantation Products, the same company that handles the seed brand of Ferry-Morse.

Finished Product Results
I’ve grown Swiss chard, a variety of mustard mixes, onions, radishes and several other veggies from a range of these seed brands and not seen a large difference in the size, quality or yield. American Seed flower seeds do well. The difference is in the price.

Prices for American Seed Packets
In the past I’ve paid one dollar for 3 or 4 packs with American Seed, as opposed to one dollar and eighty-nine cents to two dollar and twenty-nine cents for the Burpee brand. The Plantation Products website says the seed is purchased from the same sources as other brands. Information there indicates that 59 cents per pack is the standard price this year for many seeds. Varieties not offered in the 59 cents line are often available for 99 cents per packet.

American Seed packets are sometimes sold for 10 cents per pack, according to their site. Large boxes of wildflower mixes sell for two to three dollars. They’re available at Walgreens, Dollar General store and various other outlet stores.

Plantation Products handles other brands besides American Seed and Ferry Morse. They distribute the Jiffy line of peat pots, fiber pots and plastic starter cell packs with humidity domes. Jiffy also carries seed starter pellets, and germination and potting mixes. Other brands offered by the company are NK Lawn and Garden and the Mckenzie Organic and Heritage Seed packet lines in Canada.

Give them a try in your seedbeds and take note of the results. You may find growing from American Seed is another alternative to saving money in the garden.