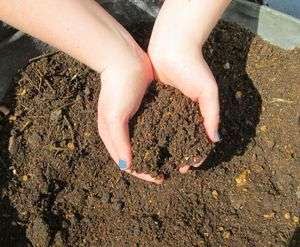 With gardening season around the corner, it’s time to dig out the flower pots and seeds to start a new batch of vegetables and flower to grow in the yard. One way I save money with my garden is by reusing many of the supplies I used last year such as old trays and pots, stakes, frames, and string. And what about re-using that potting mix? That’s a good question!
I won’t reuse potting mix in my container vegetables “as is” for several reason. For starters, most of the nutrition has been depleted which means that it won’t support a new plant without adding fertilizer. There’s also the problem of the organic material in the potting mix which break down over time into fine particles which lead to compacted soil and drainage problems. And for people like me who garden organically, reusing potting mix for the same type of container crop may lead to a build up of pests and disease.
This isn’t to say that old potting mix has no value. Here are a few ways that I reuse potting mix in my yard.
Recharge and rotate it
Old potting mix can be reused for container gardens as long as it’s been recharged and not used for the same plant. I recharge my old potting mix by dumping it into a galvanized bucket, breaking up the clods with my hands while also removing the roots, and then replacing a third of the mix with finished compost. The recharged mix is then used to grow a different food crop or flowers.
Toss it in the compost
Potting mix that I don’t recharge for use in another container is thrown in the compost bin when it turns into rich humus along with everything else. The high temperatures of composting will kill any pathogens in the potting soil making it safe to reuse once it’s broken down along with the rest of materials in the bin.
To loosen up clay soils
Another great use for old potting mix is to improve soil texture in areas where the soil is heavy with clay. Since I have quite a bit of clay in my yard, I often turn over the soil with spent potting mix and new compost. The combination of the organic material and vermiculite in the potting mix along with the compost improves drainage which makes it possible to grow flowers and vegetables in beds that used to be too soggy for plants to grow at all.
As base material in a large container
A final use for old potting mix is as a base material for super sized flower pots. When I recently bought a 30 gallon ceramic flower pot, I filled the container two-thirds of the way with old potting mix and topped it off with the newer stuff. This is more than enough to provide nutrition for new plants and a great way to save money too. If your garden soil is overall poor these tips can help you improve it!